On Sunday, November 4th, St. Tikhon’s Seminary & Monastery welcomed over 25 kids, youth, and adults from St. Stephen’s Orthodox Church, Long Island (Dennis’ home parish). Upon arrival, the group of visitors was taken directly to the Monastery Church where they were welcomed by the Seminary’s Mission Choir, who chanted a few hymns of the Eastern Orthodox Liturgical Tradition. Following the chanting, our guests were given a full tour of the Monastery Church by our very own Dennis Mathai, who thoroughly explained the history of the Church, the typical structure and significance of Eastern Orthodox Church buildings, and the importance of relics as well as the use icons in the Eastern tradition. The group was then led out of the Church and to the Icon Repository where they were able to see a collection of some of the oldest Icons in America. The tour outside of the Church continued to one of the loudest sights on the Monastery grounds, the Bell Tower. Here, the group was given a thorough explanation of the use of bells and patterns of ringing, as well as the significance of the three bar Cross in the Eastern Orthodox tradition. The group was then led through the woods to see the numerous shrines placed throughout the serene settings of the monastery and seminary grounds for the purpose of prayer and meditation. After hearing stories of and seeing the historic, hand-crafted wooden Cross everyone drank from the infamous well which pours forth natural spring water, all for free. As it began to darken outside and the weather became a bit chilly, everyone was taken indoors to the Museum to visualize and learn more about the history of the Orthodox Church in America. They were also shown the Seminary bookstore and were given the chance to make some valuable purchases. After the bookstore, the visitors were brought to the dormitory building to see our rooms as well as our Chapel where we spent a few minutes praying together. Seeing the hunger in everyone’s eyes, the group was finally led back to our Dining Hall where they enjoyed a meal prepared for them by Subway (sorry…did not have time to make chicken curry!). Following the meal, a slideshow presentation was given highlighting the various events that have taken place during our stay here at Seminary. A final tour of the Seminary Building and the Seminary Chapel was given where we took a nice group picture. The day concluded with gifts presented to all the visitors on behalf of the Seminary & Monastery Community and the tight squeeze (no joke!) back into their vehicles as they headed back to New York. A special thanks to all our brothers and sisters from St. Stephen’s Church, Long Island who willingly took the time to come and visit us here at the Seminary and Monastery. It is always a great blessing for us to have a group of people from our diocese come spend time in prayer and fellowship with us, and most especially see where we are formed as (God Willing) future priests of our Church in America. We would like to thank all those who helped coordinate this trip and continually ask for you to keep us and all seminarians of our Diocese in your prayers.

For those who are reading this and have not yet visited the Seminary & Monastery, schedule your visit today! Ask those who have visited. They’ll tell you the drive and time is worth it. 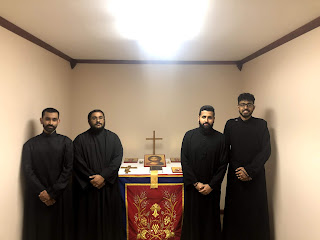 Who are these NEW guys? 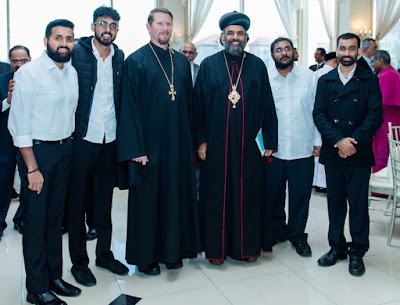